Y is for Yellow Warbler {Blogging Through the Alphabet} 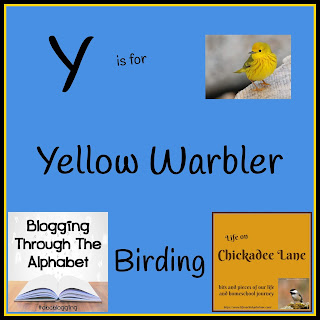 Welcome back. I'm glad you've joined us on this next-to-the-last leg of this journey along the birding trail.

This time we are observing the Yellow Warbler. North America has more than 50 species of warblers, but few combine brilliant color and easy viewing quite like the Yellow Warbler. In summer, the buttery yellow males sing their sweet whistled song from willows, wet thickets, and roadsides across almost all of North America. The females and immatures aren’t as bright, and lack the male’s rich chestnut streaking, but their overall warm yellow tones, unmarked faces, and prominent black eyes help pick them out.

They can be found in wet woods, thickets, or along streams. You can spot them in the tops of willows and other small trees.


(photos and information from allaboutbirds.org)
Yellow Warblers eat mostly insects that they pick from foliage or capture on short flights or while hovering to reach leaves. Typical prey include midges, caterpillars, beetles, leafhoppers and other bugs, and wasps.
The nests of the Yellow Warbler are frequently parasitized by the Brown-headed Cowbird. The warbler often builds a new nest directly on top of the parasitized one, sometimes resulting in nests with up to six tiers. 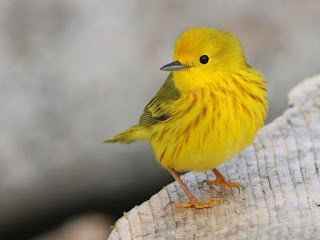 Life can be dangerous for a small bird. Yellow Warblers have occasionally been found caught in the strands of an orb weaver spider’s web. 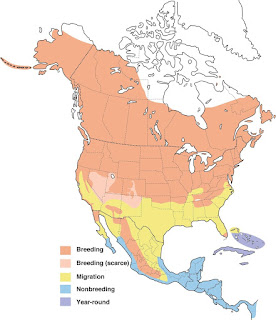 
This video quizzes us on various warblers, but I thought it would be fun to include.
Well, we'll be back next time, for the final letter this round. I hope you'll come back as we wrap up this round.