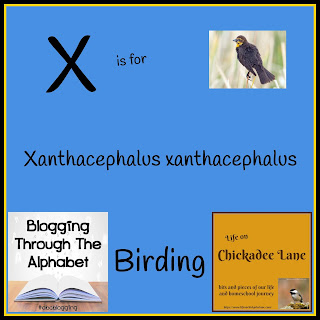 Yes, this time I had to use the scientific name. I imagine that those of you who live in middle section of the United States, Canada, and Mexico, have seen this bird, the Yellow-headed Blackbird.

I remember seeing them often when we lived in Montana, at least during the summer, and especially near lakes, rivers, and streams, among the cattails and reeds.

Yellow-headed Blackbirds eat mostly insects in summer and seeds the rest of the year. They catch aquatic insects at the water’s surface, including beetles, grasshoppers, dragonflies, caterpillars, flies, ants, and spiders. Outside of the breeding season they forage in uplands, eating grains and weed seeds. They form “rolling” flocks in farm fields, with individuals continually taking flight at the rear of the flock and landing at the front lines to feed. After establishing a foraging site, a flock will return to the same area repeatedly for several days. The blackbirds probe into soft ground and spread their bills to open up leaf sheaths or enlarge holes. They also flip over stones to unearth food.

(photos and information from allaboutbirds.org)
The male Yellow-headed Blackbird defends a small territory of prime nesting reeds. He may attract up to eight females to nest within his area. The male helps feed nestlings, but usually only in the first nest established in his territory. The other females have to feed their young all by themselves.
The female chooses a nest site within a male’s territory, always picking a spot that overhangs the water. She affixes the nest to live or dead vegetation—usually cattails, bulrushes, or reeds, but sometimes willows, tamarisk, or wild rice.

The female builds the nest by herself. She weaves long strands of wet vegetation, collected from the surface of the water, around 4–5 upright stems. She adds more strands and more supports, and then an outer wall and an inner cup of the same materials. The outside of the nest is 5–6 inches across and about the same height, while the inside measures about 3 inches across and 2.5 inches deep.
Because Yellow-headed Blackbirds always build their nests over the water, nestlings sometimes fall in and have to swim short distances to vegetation. 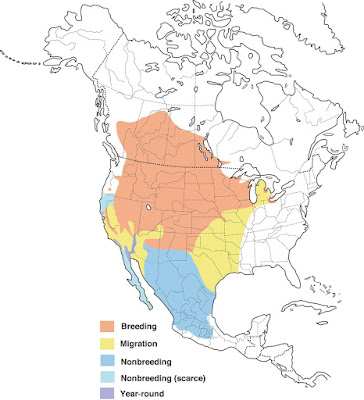 In the fall, populations that breed in the Canadian prairies migrate southeast and then due south across the United States to wintering grounds in the Southwest and throughout Mexico. Males tend to winter farther north, while more females migrate all the way to the species’ southern limits. Yellow-headed Blackbirds migrate during the day in long and irregular flocks, gathering for the night at wetlands and roosting with other blackbird species.


We're nearing the end of this round of Blogging Through the Alphabet. I hope you've been enjoying our journey along the birding trail, and that you've learned a least a little about birds. Please come back next time for the letter "Y."