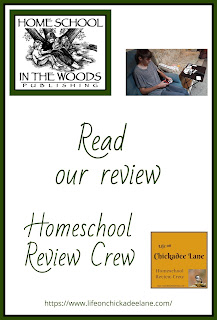 One of my favorite subjects, both to teach and to learn, is history. As part of that, one of my favorite components is the history timeline. The past few weeks, SJ and I have been having fun using the Timeline Collection: A Collection of Historical Timeline Figures from Home School in the Woods. I will confess, I have been drooling over these timeline figures for several years!

We received the download version of the Timeline Collection: Timeline Figures. This collection contains over 1,260 timeline figures, in a variety of sizes. There are small figures, which can be used on notebook sized timeline, or larger figures which can be used on a wall timeline. They can also be printed with just the name and dates, or with a brief description of the person or event. This collection is intended for all ages! (Yep, moms, that means us, too! <grin>) 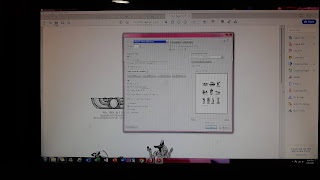 As with all projects from Home School in the Woods, you will want a lot of paper and ink on hand. All of their hands on history projects are so fantastically-detailed. The illustrations are superb. I chose not to print on only white paper. I sort of tried color-coding, to some extent. 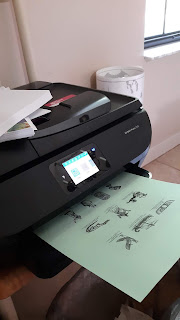 There is also a list of the historical timeline figures included, and listed chronologically. The collection is divided into segments: Creation to Christ (beginning to 1st century A.D.); Resurrection to Revolution (0-1799 A.D.); Napoleon to Now (1750 to Modern-day World History); America's History (Explorers to 21st Century); then there is also a list of bonus figures, which contain figures not already included in all of the time periods, meaning they could be from sometime B.C. or sometime A.D. (I needed a magnifying glass to read the list. I also need one to read the information beneath each figure. <rolling my eyes>) 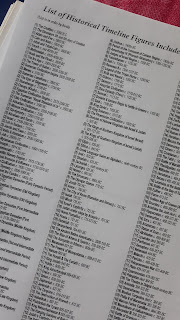 As I said, I somewhat color-coded the sheets of figures, by the ranges described above. Yes, there is a little overlap on the timeline. I actually printed a separate color for the Medieval period, since that's the period we're finishing up in high school history. 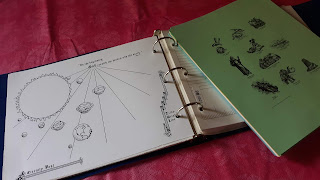 In our Bible study, we've been covering New Testament history, so I entered some of the First Century figures in our timeline book.

The timeline book we've been using since we began homeschooling is called, "We Signed the Declaration of Independence When Beethoven Was Five?" which I believe is now out of print. I've mostly written in the facts, etc., over the years, but have longed for timeline figures for years. 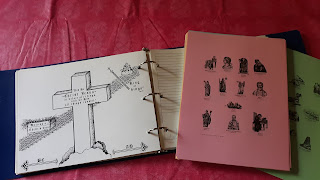 Basically, I sat down, cut out and placed a variety of random figures we have already studied, from the beginning, up into the Middle Ages. 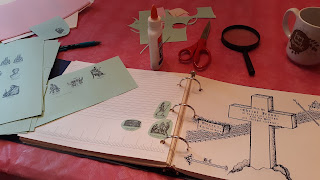 I also went through and found all the figures for the Chinese dynasties, because I had recently been studying about them for myself. Yeah, I guess I'm nerdy that way. <grin> 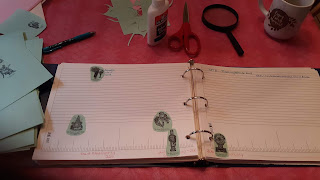 Below are some of the First Century timeline figures, including Jesus' death and resurrection, the Apostles, and some of the Roman leaders. 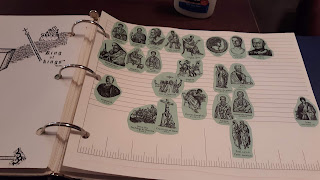 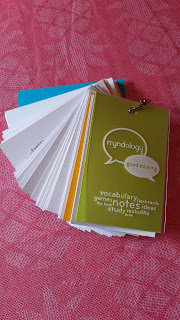 So he's been cutting them out and pasting them on, one per card. This also has colored dividing cards, so he divided them by centuries in which they were born or took place. 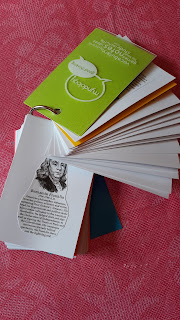 As you can see, this isn't very large, 2 1/8 x 3 5/16 inches, and includes 75 blank cards. Because the cards are on a ring, you can easily rearrange the cards, rearrange the dividers, etc. I think I'm going to pick up some more for him to use.

Now, he could have separated the information from the figures, and pasted that on the back side of the card. I think that was my intention, but I guess I forgot to mention that to him (or, he forgot that I did...not sure which!). 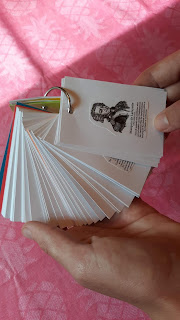 Another thing I intend for us to do, maybe, is use index cards, and index card boxes, and print off the wall sized figures, with the figures on one side of the card, and information on the back side of the card.

On the Home School in the Woods blog, Amy Pak shares some useful and encouraging information on using timelines in your school: Teaching With Timelines. In that post, she also shares Timeline Helps, full of wonderful, creative ideas for using the timeline figures.

As I said earlier, I have been drooling over these timeline figures for several years now. I am so excited to be able to use them, even after 22 years without using many figures on our timeline...and even if I basically have only 3 years left of homeschooling. Who knows? Maybe I'll be homeschooling my grandchildren! And, besides, I can use them myself. Also, if my children want to continue their own timelines, I'll be able to help them out with that!

If you are interested in using a hands on history timeline, you will definitely want to check out this collection!