W is for Whooping Crane {Blogging Through the Alphabet} 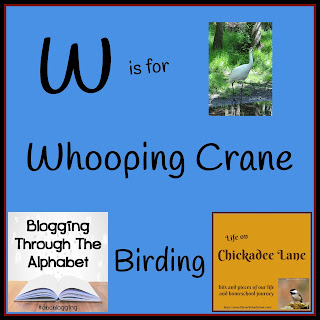 Anyone who knows me, even a little, knows that one of my passions is the Whooping Crane.

Why? When did that all start? Well, my ninth-grade science fair project was about animal conservation, endangered and extinct species. I wrote reports on Passenger Pigeons, Whooping Cranes, and the American Bison, representing extinct, greatly endangered, and coming back from the brink of extinction. 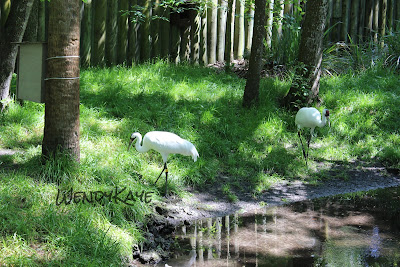 "The Whooping Crane is the tallest bird in North America and one of the most awe-inspiring, with its snowy white plumage, crimson cap, bugling call, and graceful courtship dance. It's also among our rarest birds and a testament to the tenacity and creativity of conservation biologists. The species declined to around 20 birds in the 1940s but, through captive breeding, wetland management, and an innovative program that teaches young cranes how to migrate, numbers have risen to about 600 today." (The Cornell Lab of Ornithology All About Birds) 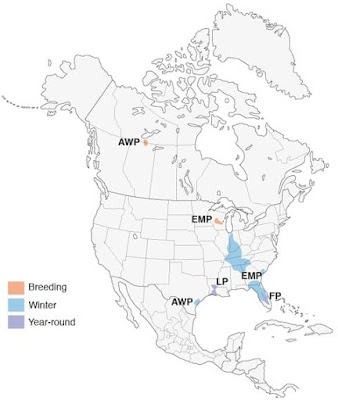 As you can see from the map, they aren't birds you will see often. Occasionally one or two can be spotted among the migrating flocks of Sandhill Cranes. The Platte River in Nebraska is one of the gathering places for the Sandhill Cranes during migration, and is also along one of the routes for the Whooping Cranes.

I remember the spring I married my first husband. We were married in the Kansas City area; I was moving to Montana, where he lived at that time. He planned our honeymoon to be in the Black Hills of South Dakota. I was excited to learn that we'd be following the Platte part of the way, so I was watching to see if I could see any cranes. I don't remember that I did; and if I did, it was probably "just" Sandhill Cranes, anyway.
A few years later, I learned about Operation Migration. The work they did to help save the Whooping Cranes was phenomenal!

Shortly after we moved down here to Florida from Montana, I was beyond excited to learn that the tiny airport in our town was one of the stopovers on the ultra-light led migration route. We made sure we were at that airport the first time they came through after we were down here! 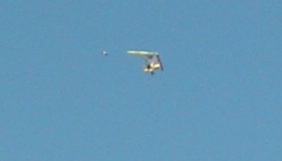 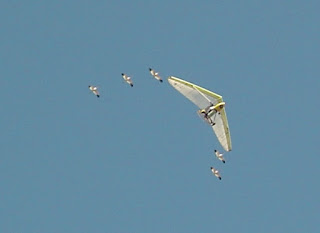 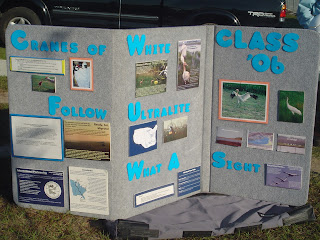 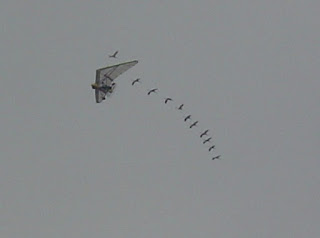 At first we could only follow the migration via written word, like maybe in a chatroom or something. I don't even remember now. Then we got to see take offs and landings, and eventually the aircraft pilots began videoing during flight...as long as they had signal. It became my morning routine to watch live streaming during migration, and chat with fellow "Craniacs" via chatroom.
Then, during the 2015/2016 migration, we received word that US Fish and Wildlife Service decided to discontinue the ultra-light led migrations, which caused more than a ripple through the Craniac community.

We were determined to be at St. Marks for the final flyover there. We had to get up quite early in the morning, to drive over...only to find out the birds wouldn't be able to fly that day after all, because of weather conditions. (As it turned out, the birds were transported that final leg by crate) 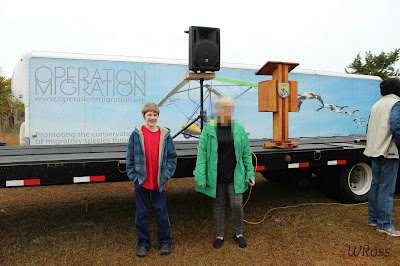 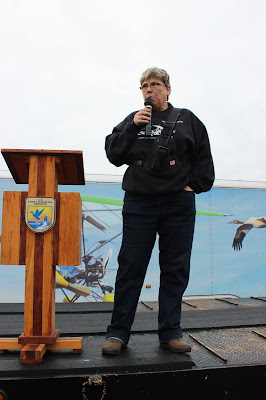 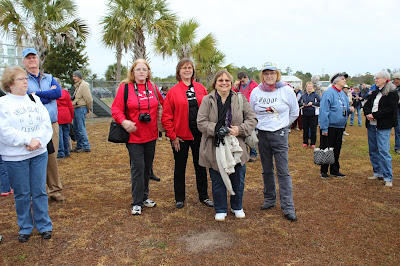 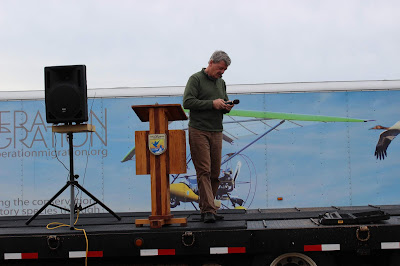 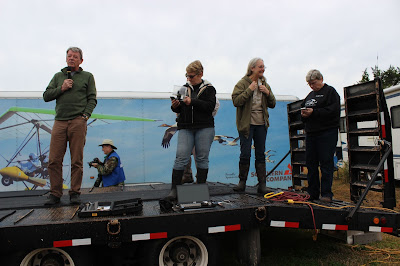 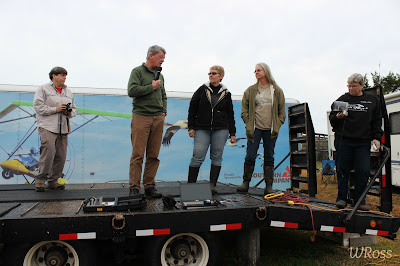 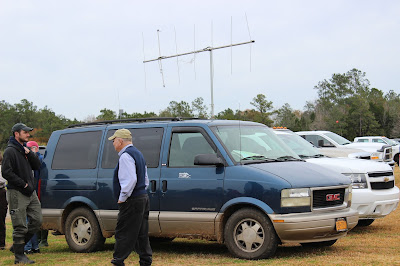 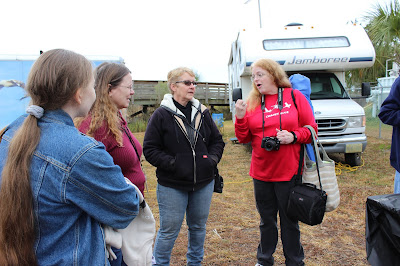 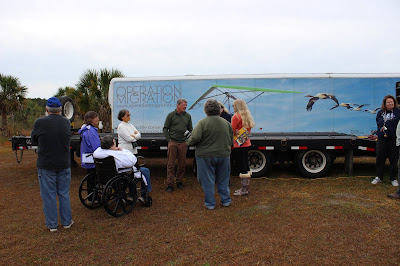 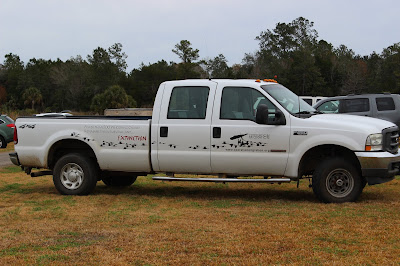 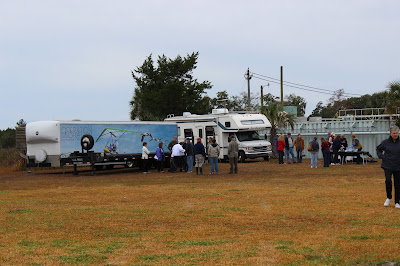 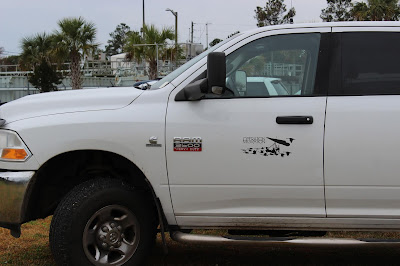 "For the Whooping crane there is no freedom but that of unbounded wilderness, no life except its own. Without meekness, without a sign of humility, it has refused to accept our idea of what the world should be like. If we succeed in preserving the wild remnant that still survives, it will be no credit to us; the glory will rest on this bird whose stubborn vigor has kept it alive in the face of increasing and seemingly hopeless odds."
--Robert Porter Allen

I had hopes, dreams, that when SJ was older (about the age he is now!), that we'd try volunteering with Operation Migration. That won't happen now. But I still want to be somewhat involved with working with Whooping Cranes...or at least in raising awareness about their plight.


See how they dance!


Just listen to them!


If you live anywhere along the Eastern US migration route, from Wisconsin to Florida, or along the western route, from Wood Buffalo National Park in Canada to the Aransas National Wildlife Refuge in Texas, or the White Lake Wetlands Conservation Area in Louisiana, keep an eye out; you may be fortunate enough to see one of these magnificent birds. And, for pity's sake, don't be like some ignorant people, and shoot it when you see it! <horrors!>

So, if you feel the need to hunt, check out this video.


I saw one in flight one time, while I was driving into town! I think I may have frightened my children. But, yes, I did pull over so I could ogle at the bird. <sheepish grin>

Do you have the idea yet that I truly am passionate about Whooping Cranes? <lol>

I hope you'll come back next time, to see what I have "up my sleeve" for "X."