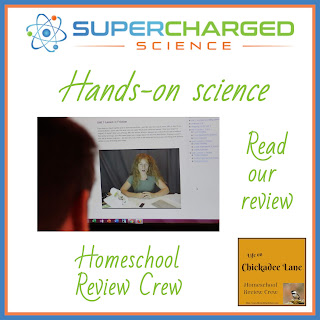 Science is one of my favorite subjects, both to learn and to teach; but it seems it's not really one of SJ's favorite subjects. It seems the past couple of years, no matter what I've tried, I can barely get him to even do science. <perplexed> When we were given the opportunity from Supercharged Science to receive a full year of access to their e-Science Homeschool Science Curriculum, I was more than eager. It sounded like a great fit for SJ.

We received a subscription to a year of full access to the online homeschool science curriculum, for all levels, grades Pre-K through 12. This curriculum is self-guided, which makes it easy for the homeschool parent.

Supercharged Science creator, Aurora Lipper, is certainly experienced and well-qualified to instruct science. She has both her Bachelor's and Master's degrees in Mechanical Engineering, and a minor in Mathematics. She worked for NASA at age 17. She is a mechanical engineer, university instructor, pilot, astronomer, in addition to being a mother of four.

Her instructive videos for Supercharged Science are engaging, enthusiastic, as well as instructive. In addition to the videos, there are experiments, activities, projects, and worksheets/lab sheets. There are also supply lists for each experiment.

The curriculum can be used in two ways: by grade level, or by topics.

This curriculum can be used either as complete curriculum, or you can use it to supplement your core science curriculum.


You will also find instructions for keeping a scientific journal, which I found very useful...but challenging for SJ.

SJ chose to use this by topics. Methodical person that he is, he chose topic 1: Mechanics, to begin with.

My "vision" was that he'd work his way through the lessons, watching the videos and doing the experiments. And at least fill in the lab sheets. It didn't quite turn out that way. 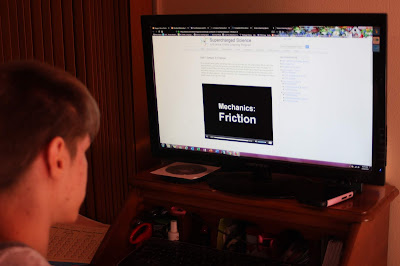 He watched the videos. I think he read through the information which accompanies each video. But he didn't work on many experiments. 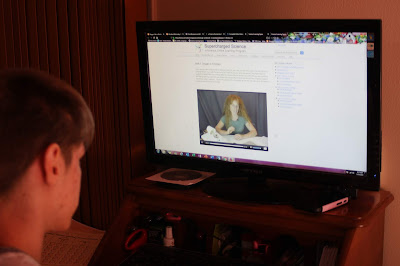 I did manage to catch him working on this one, for friction. He learned that the force to get the books moving was greater than the force was to keep them moving. 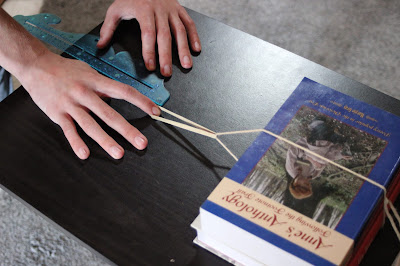 He tied yarn around the two books, with a rubber band at one edge. Then he placed a ruler at the edge of the rubber band when it was barely taut. 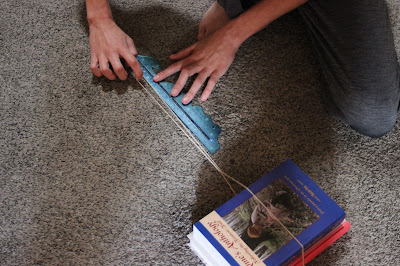 Then he began pulling, stretching the rubber band until the books began to move. He wrote down that measurement on the lab sheet. 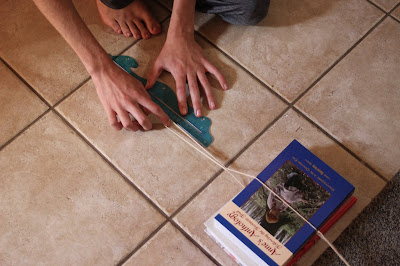 He chose five different surfaces to pull the books across. It was interesting to see the different lengths the rubber band stretched on the various surfaces. 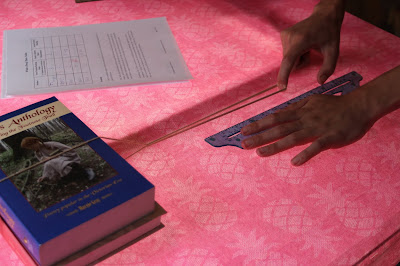 Before he began pulling across the surfaces, he had to make a hypothesis, ranking the surfaces from lowest to highest friction. 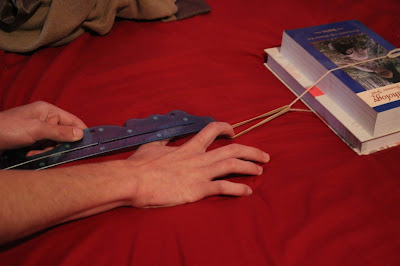 After he completed all surfaces, he then had to write in the actual friction ranking. This is where his expressive receptive language disorder frustrates us both. He didn't quite catch the concept of ranking from lowest to highest amount of friction needed. 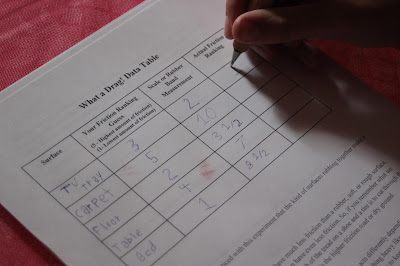 But he finally got the chart completed, after two or three attempts of my explaining it to him.

I really like the concept of this program. I still think it could work for SJ; maybe we'll change things up a little bit (maybe he really does require me to stand over him, to make sure he gets it done! <grin>). I honestly thought he'd choose the life science or biology topics, but it looks like he may be more interested in physics and such. He wants to work on the electricity and electronics unit next.

If you want to determine whether or not this might be a good fit for your child, sign up for the free class.

There were a total of 65 families from the Crew who reviewed Supercharged Science, including a few video reviews. Simply click the banner below to read more reviews.