K is for Killdeer {Blogging Through the Alphabet} 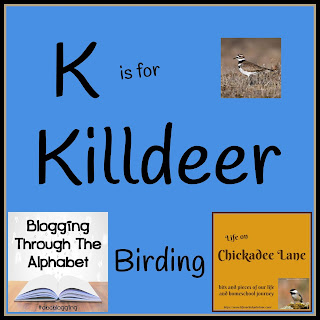 Welcome back. I'm glad to have you joining us for the letter "K." The Killdeer is another of my favorite birds. Oh, so you've noticed I have a lot of favorite birds?...I do, indeed. <grin>

The Killdeer is a member of the plover family, which are among the shorebirds. Rather than spending much time near shorelines, Killdeers tend to found mostly on open ground with low vegetation (or no vegetation at all), including lawns, golf courses, driveways, parking lots, and gravel-covered roofs, as well as pastures, fields, sandbars and mudflats.


(All photos from allaboutbirds.org)
The Killdeer is about the size of the American Robin, only with longer legs and wings.

Killdeer get their name from the shrill, wailing kill-deer call they give so often. Eighteenth-century naturalists also noticed how noisy Killdeer are, giving them names such as the Chattering Plover and the Noisy Plover.
The Killdeer’s broken-wing act leads predators away from a nest, but doesn’t keep cows or horses from stepping on eggs. To guard against large hoofed animals, the Killdeer uses a quite different display, fluffing itself up, displaying its tail over its head, and running at the beast to attempt to make it change its path.
Killdeer lay their eggs into an empty nest but add other materials later on. Some of these items they pick up as they are leaving and toss over their shoulder into the nest. I remember how we used to hunt Killdeer nests in the open pastures when we lived in Montana. I think that's when they became one of my favorite birds.
Killdeer primarily feed on invertebrates, such as earthworms, snails, crayfish, grasshoppers, beetles, and aquatic insect larvae. They follow farmers' plows in hopes of retrieving any unearthed worms or insect larvae. They'll also eat seeds left in agricultural lands. An opportunistic forager, Killdeer have been observed hunting frogs and eating dead minnows. 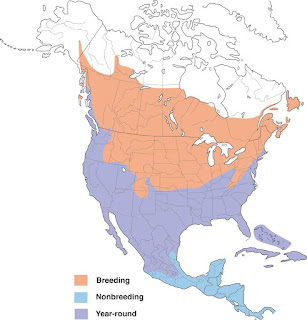 As you can see, they can be found all across the United States, and into Canada.

I'm glad you came by. I hope you'll bob back in next week, for the letter "L."