Scripture and a Snapshot, April 21 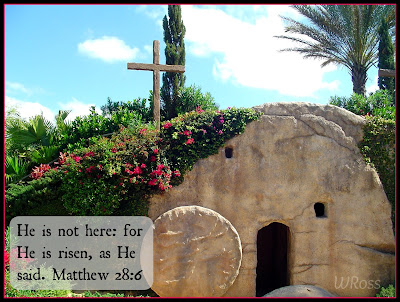 And when the Sabbath was past, Mary Magdalene, and Mary the mother of James, and Salome, had bought sweet spices, that they might come and anoint him. And very early in the morning the first day of the week, they came unto the sepulchre at the rising of the sun. And they said among themselves, Who shall roll us away the stone from the door of the sepulchre? And when they looked, they saw that the stone was rolled away: for it was very great. And entering into the sepulchre, they saw a young man sitting on the right side, clothed in a long white garment; and they were affrighted. And he saith unto them, Be not affrighted: Ye seek Jesus of Nazareth, which was crucified: He is risen; He is not here: behold the place where they laid Him. But go your way, tell His disciples and Peter that He goeth before you into Galilee: there shall ye see Him, as He said unto you. And they went out quickly, and fled from the sepulchre; for they trembled and were amazed: neither said they any thing to any man; for they were afraid. Now when Jesus was risen early the first day of the week, He appeared first to Mary Magdalene, out of whom He had cast seven devils. Mark 16:1-9.

Now upon the first day of the week, very early in the morning, they came unto the sepulchre, bringing the spices which they had prepared, and certain others with them. And they found the stone rolled away from the sepulchre. And they entered in, and found not the body of the Lord Jesus. And it came to pass, as they were much perplexed thereabout, behold, two men stood by them in shining garments: And as they were afraid, and bowed down their faces to the earth, they said unto them, Why seek ye the living among the dead? He is not here, but is risen: remember how he spake unto you when he was yet in Galilee, Saying, The Son of man must be delivered into the hands of sinful men, and be crucified, and the third day rise again. And they remembered his words, And returned from the sepulchre, and told all these things unto the eleven, and to all the rest. It was Mary Magdalene and Joanna, and Mary the mother of James, and other women that were with them, which told these things unto the apostles. Luke 24:1-10.
In the end of the Sabbath, as it began to dawn toward the first day of the week, came Mary Magdalene and the other Mary to see the sepulchre. And, behold, there was a great earthquake: for the angel of the Lord descended from heaven, and came and rolled back the stone from the door, and sat upon it. His countenance was like lightning, and his raiment white as snow: And for fear of him the keepers did shake, and became as dead men. And the angel answered and said unto the women, Fear not ye: for I know that ye seek Jesus, which was crucified. He is not here: for He is risen, as He said. Come, see the place where the Lord lay. Matthew 28:1-6. 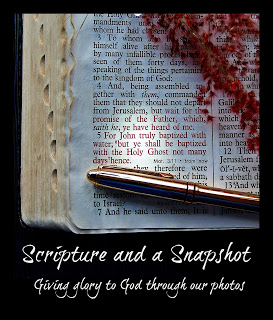 Scripture and a Snapshot

Labels: Inspiration for the Day Scripture and a Snapshot