J is for Junco {Blogging Through the Alphabet} 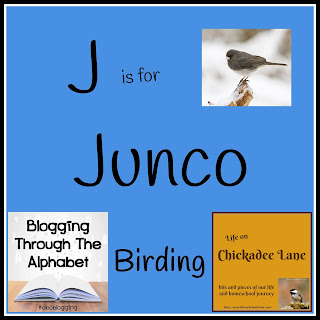 Thank you for returning to our Blogging Through the Alphabet journey in birding. Today we'll be talking about a common visitor to our backyard bird feeders, the Dark-eyed Junco.

The Junco is a member of the sparrow family. They are one of the most abundant forest birds in North America, so they will be easy to spot on woodland walks. They will also flock to your feeders and the ground beneath them.

There is a huge range of geographic variation in the Dark-eyed Junco. In general there are two widespread forms of the Dark-eyed Junco: “slate-colored” junco of the eastern United States and most of Canada, which is smooth gray above; and “Oregon” junco, found across much of the western U.S., with a dark hood, warm brown back and rufous flanks. Other more restricted variations include the slate-colored-like “white-winged” and Oregon-like “pink-sided” juncos of the Rockies and western Great Plains; and the Yellow-eyed Junco-like “red-backed” and “gray-headed” juncos of the Southwest.


(all photos from allaboutbirds.org)

The Gray-headed has an all-pale bill.
Pink-sided can be found in the Rocky Mountains.
The Red-backed is found in southwestern United States. The upper mandible is darker gray than the lower.
The White-winged is slightly paler gray than the Slate-colored, with faint white wingbars and a dark face.
The "cismontanus" subspecies breeds in the Yukon Territory and British Columbia.

Dark-eyed Juncos are primarily seed-eaters, with seeds of chickweed, buckwheat, lamb’s quarters, sorrel, and the like making up about 75% of their year-round diet. At feeders they seem to prefer millet over sunflower seeds. During the breeding season, Dark-eyed Juncos also eat insects including beetles, moths, butterflies, caterpillars, ants, wasps, and flies.

Juncos are the "snowbirds" of the middle latitudes. Over most of the eastern United States, they appear as winter sets in, and then retreat northward each spring. Other juncos are year-round residents, retreating into woodlands during the breeding season, or, like those of the Appalachian Mountains, moving to higher elevations during the warmer months.


Thank you for stopping in. I hope you'll return for next week's letter, "K."