I is for Ibis {Blogging Through the Alphabet} 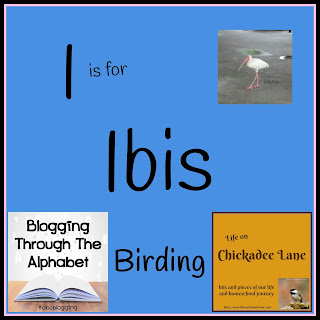 Hello! I am glad you have joined us again this week on our Blogging Through the Alphabet journey of birding.

According to The Cornell Lab of Ornithology AllAboutBirds site, there are three species of Ibis that can be found in North America.

The White Ibis is very common around here. They are wading birds. They use freshwater marshes, coastal estuaries, mangroves, flooded pastures, mudflats, and swamps. They usually forage in shallow areas with less than 8 inches of water, but they also use lawns and parks.

They have long legs and a long neck that they hold out straight in flight. Their bill is long and curved. 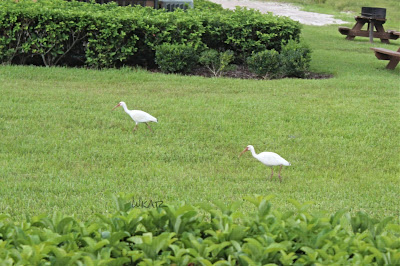 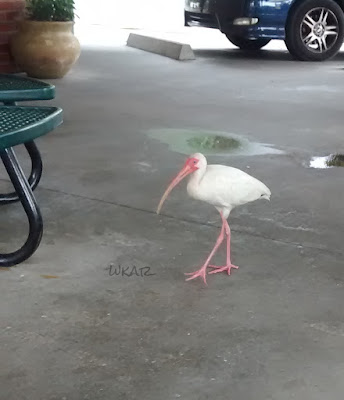 White Ibises are social birds; they forage in groups, fly in groups, and nest in colonies. We see them all over the place around here, even at the Sonic drive-in.
The White Ibis is protected by the U.S. Migratory Bird Treaty Act, because of the loss of wetland habitat due to the human development of coastal areas and their freshwater feeding areas.

The White-faced Ibis is not found around here at all. It is a dark wading bird. It's diet is very similar to the White Ibis.


(photos from AllAboutBirds.org)
Obviously they are also wading birds, and inhabit marshes and irrigated land. It's quite possible we saw them when we lived in Montana, although I don't remember now.
This species inhabits primarily freshwater wetlands, especially cattail and bulrush marshes, although it feeds in flooded hay meadows, agricultural fields, and estuarine wetlands.
Go here for more information about the White-Faced Ibis.

Glossy Ibises are found throughout the world. In appearance they are very similar to the White-Faced Ibis. At a distance, Glossy Ibises look uniformly dark, but a close look in good light reveals stunning colors: deep maroon, emerald, bronze, and violet.


(photos from AllAboutBirds.org)
Their habitat is similar to that of the other Ibises, as is their diet. They also readily consume crops such as rice and sorghum.
Widespread in the Old World, the species is found in the New World mainly in the West Indies and along our Atlantic Coast, especially Florida.
More information about the Glossy Ibis can be found here.

I hope you will wade back in next week, when we cover the letter "J."