F is for Flamingos {Blogging Through the Alphabet} 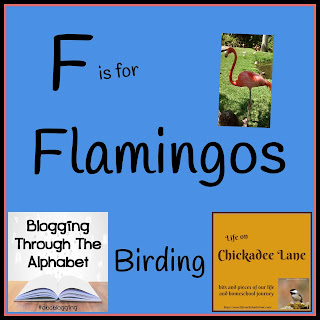 I mentioned this past Wednesday that last week was our spring break, and we spent a long weekend in Sarasota/Siesta Key. One of the places we went was Sarasota Jungle Gardens (I'll share more about that in another post). We were delighted with the flamingos! 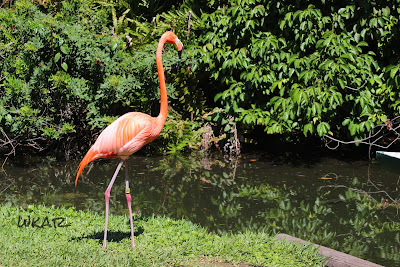 There are 6 species of flamingos:

Greater Flamingo--the most widespread and largest species of the flamingo family. It is found in Africa, on the Indian subcontinent, in the Middle East, and in southern Europe.

Lesser Flamingo--a species of flamingo occurring in sub-Saharan Africa, with another population in India. Birds are occasionally reported from further north, but these are generally considered vagrants.

Chilean Flamingo--breeds in South America from Ecuador and Peru to Chile and Argentina and east to Brazil; it has been introduced into Germany and the Netherlands (colony on the border, Zwillbrocker Venn). Also, a small population occurs in Utah and California. This species is listed as near threatened by the IUCN.

James's Flamingo--a species of flamingo that populates the high altitudes of Andean plateaus of Peru, Chile, Bolivia, and Argentina. It is named for Harry Berkeley James, a British naturalist who studied the bird.

Andean Flamingo--one of the rarest flamingos in the world. It lives in the Andes mountains of South America. 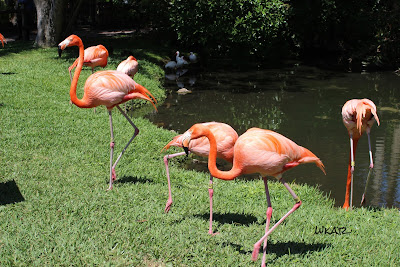 Flamingos filter-feed on brine shrimp and blue-green algae as well as larva, small insects, mollusks and crustaceans making them omnivores. Their bills are specially adapted to separate mud and silt from the food they eat, and are uniquely used upside-down. 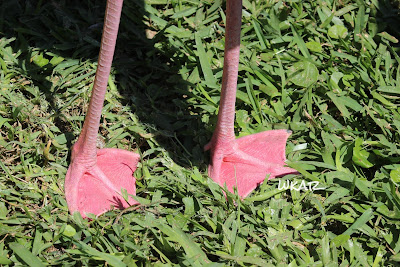 "The webbed feet of a Flamingo allow them to stand in the muddy waters without losing their balance. They also allow them to easily swim in the waters." (Flamingo-World) 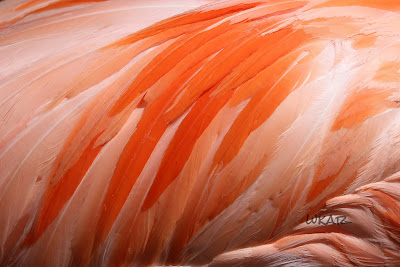 Why are Flamingos Pink?  "Have you ever heard the expression 'you are what you eat'? Well, flamingos are just that. They get their reddish-pink colour from special colouring chemicals called pigments found in the algae and invertebrates that they eat." (BBC Newsround)

"The coloring for a Flamingo ranges from various shades of pink all the way to a crimson red. Some of them are shades of orange too. They also have colors of cream and white mixed in." (Flamingo-World) 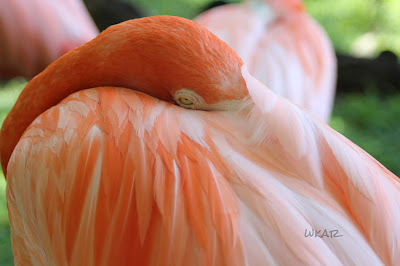 I found it fascinating the way they tuck their beaks up under their feathers, and usually had their eyes open, watching us. 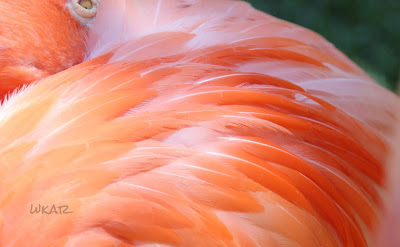 While we were there, we saw signs stating that it was mating season, so the birds might be a bit aggressive, and possibly bite. We heard of at least a couple children who were bitten while we were there. The bites didn't seem too bad, though. 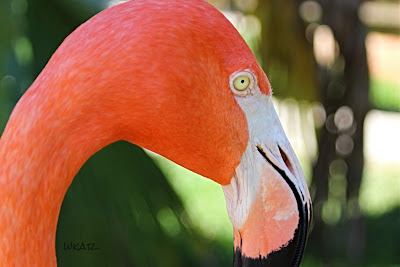 The Bahamas Are Filled With Flamingos Once Again (Audubon)

Thank you for coming by; I hope you'll strut back in again next week, for the letter "G." 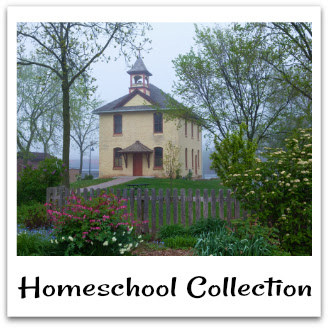