E is for Eagles {Blogging Through the Alphabet} 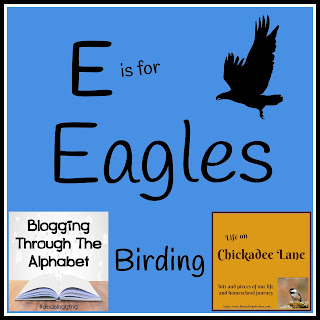 But they that wait upon the Lord shall renew their strength; they shall mount up with wings as eagles; they shall run, and not be weary; and they shall walk, and not faint. Isaiah 40:31

Welcome back to our Blogging Through the Alphabet journey through birding.

I think one of the most recognized birds across the North America is the Bald Eagle, especially in the United States, since it is, after all, our national emblem. 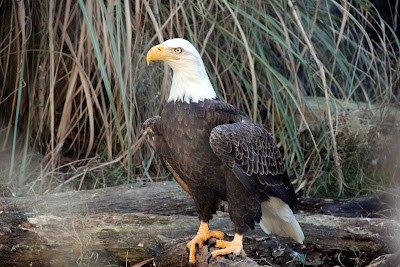 Image by steve felberg from Pixabay

Fish are the main staple of the Bald Eagle's diet, but they also eat birds, reptiles, amphibians, invertebrates (crabs), and small mammals. They will capture live animals, or dine on carrion. I've seen them hanging around the dumps in our vicinity, especially during the winter. 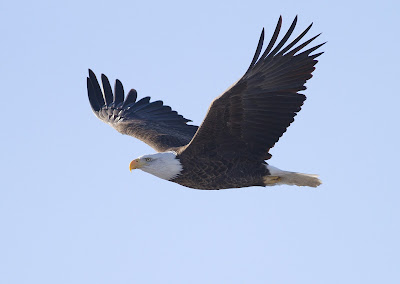 Image by skeeze from Pixabay

I used to think they were spotted only in the West, but I have learned their range is much more widespread than that. No matter how frequently I may spot one, it is still thrilling to see one soaring in the sky above. 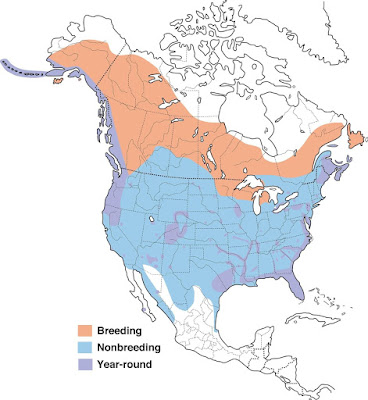 "The Bald Eagle’s recovery is a spectacular conservation success story, and numbers have increased between 1966 and 2015, according to the North American Breeding Bird Survey. Partners in Flight estimates the global breeding population at 250,000, with 88 percent spending some part of the year in the U.S., 31 percent in Canada, and 8 percent in Mexico. The species rates a 9 out of 20 on the Continental Concern Score and are not on the 2016 State of North America's Birds' Watch List, but are a U.S.-Canada Stewardship Species. Once abundant in North America, the species became rare in the mid-to-late 1900s—the victim of trapping, shooting, and poisoning as well as pesticide-caused reproductive failures. In 1978 the bird was listed for protection under the Endangered Species Act. Since 1980, gentler treatment by humans along with the banning of DDT (the bird’s main pesticide threat) have led to a dramatic resurgence. By the late 1990s, breeding populations of Bald Eagles could be found throughout most of North America. In June 2007, the bird’s recovery prompted its removal from the Endangered Species list. Continuing threats to Bald Eagle populations include lead poisoning from ammunition in hunter-shot prey, collisions with motor vehicles and stationary structures, and development-related destruction of shoreline nesting, perching, roosting and foraging habitats. They are still vulnerable to environmental pollution, as evidenced by the 1989 Exxon Valdez oil spill in Prince William Sound, Alaska. An estimated 247 Bald Eagles died from oil exposure. Population levels in the Sound decreased by almost four percent the following year. The local population returned to pre-spill levels by 1995." ~from AllAboutBirds.org
The Golden Eagle is smaller than the Bald Eagle. They may sometimes be confused with immature Bald Eagles. One way to distinguish a Golden Eagle from an immature Bald Eagle is leg plumage. A Golden Eagle's legs are entirely feather covered; an immature Bald Eagle's lower legs are bare. 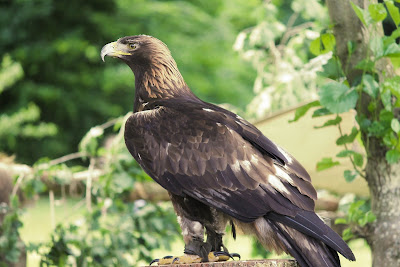 Image by Manfred Richter from Pixabay

Golden Eagles prey mainly on small to medium-sized mammals, including hares, rabbits, ground squirrels, prairie dogs, and marmots. Black-tailed jackrabbits are a key prey species throughout much of their range. These eagles are also capable of taking larger bird and mammal prey, including cranes, swans, deer, and domestic livestock. They have even been observed killing seals, mountain goats, bighorn sheep, pronghorn, coyotes, badgers, and bobcats. In addition to live prey, Golden Eagles often feed on carrion, following crows and other scavengers to a meal. They also catch fish, rob nests, and steal food from other birds. 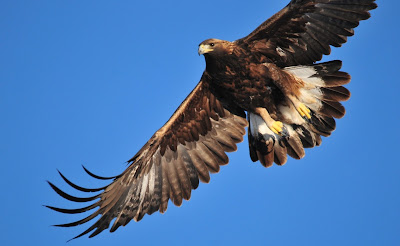 Image by skeeze from Pixabay

I remember when we lived in Montana, we would often see Golden Eagles. I think their flight is equally as majestic as that of the Bald Eagle's. 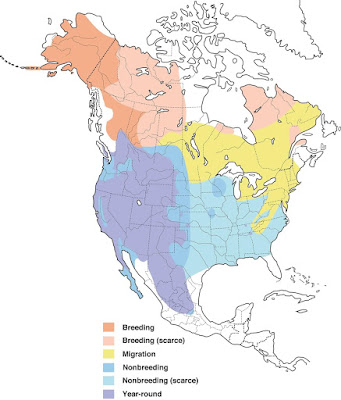 This video compares the Bald Eagle and Golden Eagle. It's nearly 40 minutes long, and I haven't viewed the full video.

Resources for more information about eagles:


I hope you will soar back in next week, when we explore the letter "F."