D is for Ducks {Blogging Through the Alphabet} 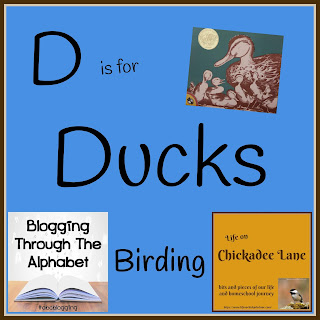 Welcome back. I'm glad you joined us again this week, for the letter D.

I am sure you know that there are many kinds of ducks. They are in the Anatidae family, which includes ducks, geese, swans, and other waterfowl.

Some ducks you may spot across the United States and Canada:
(photos copied from AllAboutBirds.org)

American Black Duck
Normally found in eastern North America, American Black Ducks occasionally show up on the West Coast, Europe, and even Asia. Some of these birds may be escaped pets, but others are known to be wild ducks: for instance, one female banded in New Brunswick, Canada, turned up later in France.
Black-Bellied Whistling Duck

The Black-bellied Whistling-Duck is a boisterous duck with a brilliant pink bill and an unusual, long-legged silhouette. In places like Texas and Louisiana, watch for noisy flocks of these gaudy ducks dropping into fields to forage on seeds, or loafing on golf course ponds. Listen for them, too—these ducks really do have a whistle for their call. Common south of the U.S., Black-bellied Whistling-Ducks occur in several southern states and are expanding northward.


Bufflehead
The Bufflehead nests almost exclusively in holes excavated by Northern Flickers and, on occasion, by Pileated Woodpeckers.

Unlike most ducks, the Bufflehead is mostly monogamous, often remaining with the same mate for several years.

One of the most widespread species of waterfowl in the world, the Fulvous Whistling-Duck has a limited distribution in the southern United States. Its mostly seed-based diet makes it fond of rice-growing areas.

When engaged in behavioral interactions, the Harlequin Duck gives distinctly unducklike squeaks, the source of one of its local names: sea mouse.

The Long-tailed Duck is one of the deepest diving ducks, and can dive as deep as 60 meters (200 feet) to forage.

Mallard
If someone at a park is feeding bread to ducks, chances are there are Mallards in the fray. Perhaps the most familiar of all ducks, Mallards occur throughout North America and Eurasia in ponds and parks as well as wilder wetlands and estuaries. The male’s gleaming green head, gray flanks, and black tail-curl arguably make it the most easily identified duck.

Along the Gulf of Mexico coast lives a rich brown duck with a lovely buff head and neck, a bright yellow bill, and a distinctive black spot at the gape. It’s reminiscent of a female Mallard or an American Black Duck, but this is the closely related Mottled Duck. Look for this species in pairs or small flocks, mostly in freshwater marshes near the coast.


Ring-necked Duck
The male Ring-necked Duck is a sharply marked bird of gleaming black, gray, and white. Females are rich brown with a delicate face pattern. At distance, look for this species’ distinctive, peaked head to help you identify it. Even though this species dives for its food, you can find it in shallow wetlands such as beaver swamps, ponds, and bays.

Ruddy Duck
Though Ruddy Ducks are native to the Americas, one population became established in England after captive ducks escaped in 1952. This population grew to about 3,500 individuals by 1992, and now appears to be expanding into the Netherlands, France, Belgium, and Spain.
Wood Duck
The Wood Duck is the only North American duck that regularly produces two broods in one year.

The Wood Duck nests in trees near water, sometimes directly over water, but other times over a mile away. After hatching, the ducklings jump down from the nest tree and make their way to water. The mother calls them to her, but does not help them in any way. The ducklings may jump from heights of over 50 feet without injury.

Then of course there are the domesticated ducks. I think the most common one is the Pekin. 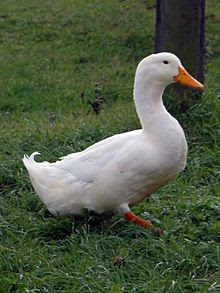 Duck Breeds: 14 Breeds YOU Could Ownand Their Facts at a Glance--A Life of Heritage

Of course, there are also some fun picture books. These three are used in the Five in a Row curriculum. 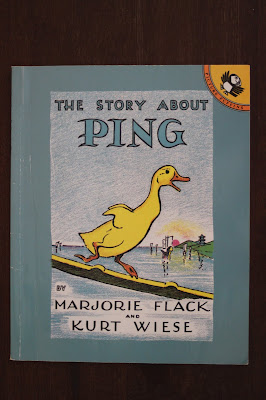 Ping is a little duck, who's a little disobedient and naughty, living along the Yangtze River in China. But he learns a lesson about obedience. 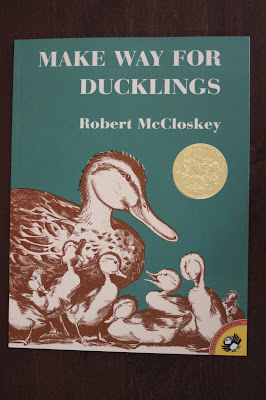 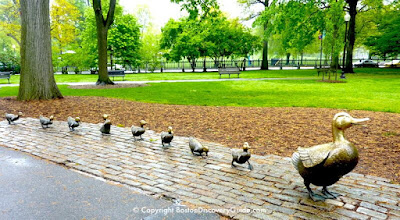 You can learn more about the statue of mother duck and her ducklings at the Boston Discovery Guide. 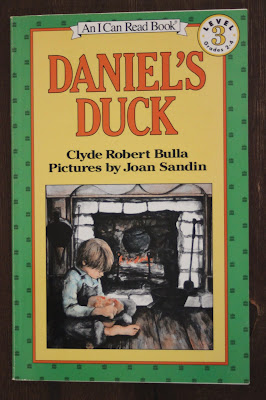 Daniel's Duck is a carved duck. Daniel feels hurt when others laugh at his carved duck. But they weren't laughing to cause hurt; they were laughing in delight.

Here are some resources to go along with Daniel's Duck, from TheHomeschoolMom.


And just for fun:
I hope you've enjoyed this look at ducks. I hope you'll waddle back in again next week, for the letter "E."

*On a somewhat unrelated note: We saw our first hummingbirds of the season today! Take heart, my Northern friends; they are on their way North!*