A new year has begun on the Homeschool Review Crew. Frankly, there is no better way to start off the year than with one of our all-time favorite vendors: Heirloom Audio! 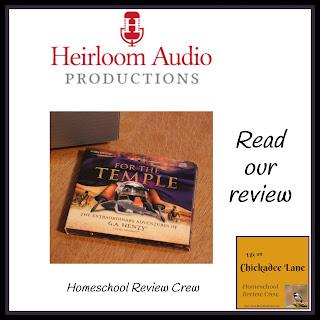 Because we are currently learning about the history of the early Christian church in my 16-year-old son's Bible class, we were excited for the opportunity to receive and review Heirloom Audio's latest audio drama release: For the Temple, on CD. We also received a PDF study guide to go with it. 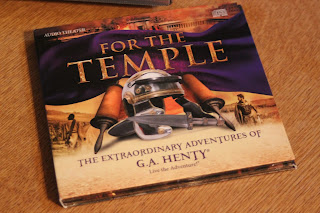 "For the Temple" takes place around AD 67-70, during the days of Nero, Vespasian, Titus, Agrippa, and Josephus; during the Roman rule over Israel, and the rebellion of the Zealots.

The story is seen through the eyes of John, the son of a vintner in Galilee. SJ was impressed with the fact that John was the same age as he is. He decides to join Josephus in the quest to protect the temple. 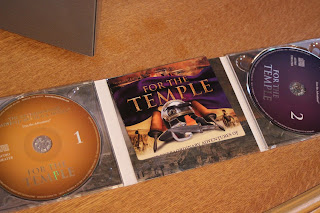 One of the scenes reminds us of Gideon and his small band and how they overthrew the Midianites. John and his small band of men harass the Roman army, by blowing horns during the night, while remaining hidden. One night, he goes into the midst of the Roman camp, and sets fires, and slips out of the camp without being captured. These actions greatly annoy the Romans, and play to their superstitions, causing them to think the gods are taunting them.

Of course, in the end, the Romans attack Jerusalem, and destroy the temple. 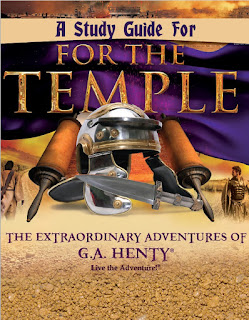 This study guide is 51 pages. For each "chapter" of the story, there are comprehension questions (Listening Well), vocabulary words (Defining Words), and Thinking Further provides opportunities for further research, such as looking into background information in this period of history, or questions to make one think (such as: Why do you suppose Titus doesn’t make the connection between this John and the John who has been harassing his troops?, when John spent some time in the Roman camp after an injury).

Other suggestions made: look various locations up on a map; make a family tree of the Herodians; or figure the distances between locations, such as Jotapata and the Sea of Galilee or Caesarea and Gadara.

We'll go through the study guide much more thoroughly when we reach this time period in our Bible class, later this year. 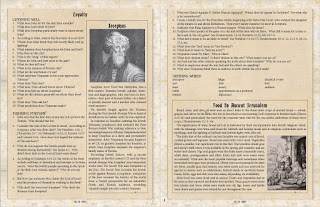 As a seventh-day Sabbath keeper, I was especially interested to read the information defining the Sabbath and Shabbat:


"The Sabbath is Judaism’s day of rest and seventh day of the week, on which religious Jews, Samaritans and certain Christians remember the Biblical creation of the heavens and the earth in six days... Shabbat observance entails refraining from work activities and engaging in restful activities to honor the day. Judaism’s traditional position is that unbroken seventh-day Shabbat originated among the Jewish people, as their first and most sacred institution, though some suggest other origins.

"Shabbat is observed from a few minutes before sunset on Friday evening until the appearance of three stars in the sky on Saturday night… Established within Judaism through the law of Moses, Christians inherited a Sabbath practice that reflected two great precepts: the commandment to “remember the sabbath day, to keep it holy” and God’s blessing of the seventh day (Saturday) as a day of God’s rest in creation [Genesis 2:1-3] and declared as made for man by Jesus [Mark 2:27].

"Shabbat is a festive day when Jews exercise their freedom from the regular labors of everyday life. It offers an opportunity to contemplate the spiritual aspects of life and to spend time with family."

As you can imagine, we thoroughly enjoyed listening to this audio drama as much as we've enjoyed all the others we've heard. I'm sure you'll enjoy it, too; maybe soon you'll be as excited to receive this in your mailbox as we were!


Heirloom Audio has produced several of Henty's books into audio dramas, some of which we have previously reviewed (over on my old blog):
Connect with Heirloom Audio via social media:
Facebook
Twitter
Instagram

I am certain you will want to read the other Crew members' reviews; simply click the banner below.